KINGSTON — After a two-year hiatus due to the ongoing COVID-19 pandemic, the Development Bank of Jamaica (DBJ) and Private Sector Organisation of Jamaica (PSOJ) are gearing up to host the seventh staging of the annual National Business Model Competition (NBMC), which will see new participants University of the Commonwealth Caribbean (UCC) and College of Agriculture, Science and Education (CASE) joining the list of tertiary institutions competing to gain the coveted national title.

A total of 15 teams from five universities across the island will vie for bragging rights and cash prizes totalling J$4m on April 7 and 8.

Milverton Reynolds, Managing Director of the DBJ, said, “The NBMC is an initiative that brings together the creative minds of students enrolled in these institutions … As such, the student entrepreneurs are part a major push that is being placed on developing a robust entrepreneurship ecosystem.” The competition, over the years, has sought to create a robust entrepreneurial and early-stage ecosystem for Jamaica while nurturing creativity and critical thinking among tertiary-level business school students. To this end, the addition of CASE, a Portland-based agricultural college, and UCC, a seven-campus institution, signals continued growth of the initiative that is now organised through the DBJ’s recently launched BIGEE programme.
Reynolds explained, “BIGEE, which means ‘Boosting Innovation, Growth & Entrepreneurship Ecosystems’, is a US$25 million Government of Jamaica, five-year programme that is financed by the Inter-American Development Bank. Its aim is to support the growth of local micro, small and medium-sized enterprises, with an emphasis on those that use technology.”

PSOJ Executive Director Imega Breese McNab added that this new focus proves timely for this year’s competitors. She said, “There is a saying that states: ‘in every crisis there are opportunities’. Our silver lining here is that as a result of the digital transformation brought on by the pandemic, the projects entered into this year’s competition are all digitally enabled and heavily tech-focused… [So], we’re looking forward to emboldening some of Jamaica’s future leaders in business as we provide experiential learning as part of their entrepreneurial development.”

Jamaican universities performed exceptionally well at the 2019 international competition as UWI’s Ja Bio Plastics and UTech’s CCML Formula and Xermosol were listed as semi-finalists, while Northern Caribbean University’s (NCU) MarijTech received an honourable mention. This came on the heels of major successes in 2018 when NCU’s Beasc Technologies was awarded first-place bragging rights, the Global Champion trophy and US$30,000; UWI’s Eco-Structures was awarded second place receiving a cash prize of US$20,000; and UWI’s Queritel placed in the top 10 out of 42 universities worldwide.

Business modelling, geared at reducing the failure rate of start-up businesses, differs from a static business plan and focuses on assessing customer interactions then pivoting and changing course based on the lessons learned. The national competition was conceived at the DBJ’s first Venture Capital Conference held in September 2013 by keynote speaker, Paul Ahlstrom of Alta Ventures Group, Utah, USA, who along with Joseph Matalon (former Chairman of the DBJ), offered to fund the prize for the winner if local universities collaborated. The competition was designed to facilitate young entrepreneurs who are in need of mentors, coaches and angel investors to provide the capital to build their businesses, while aiding in taking their business ideas through to operationalisation. 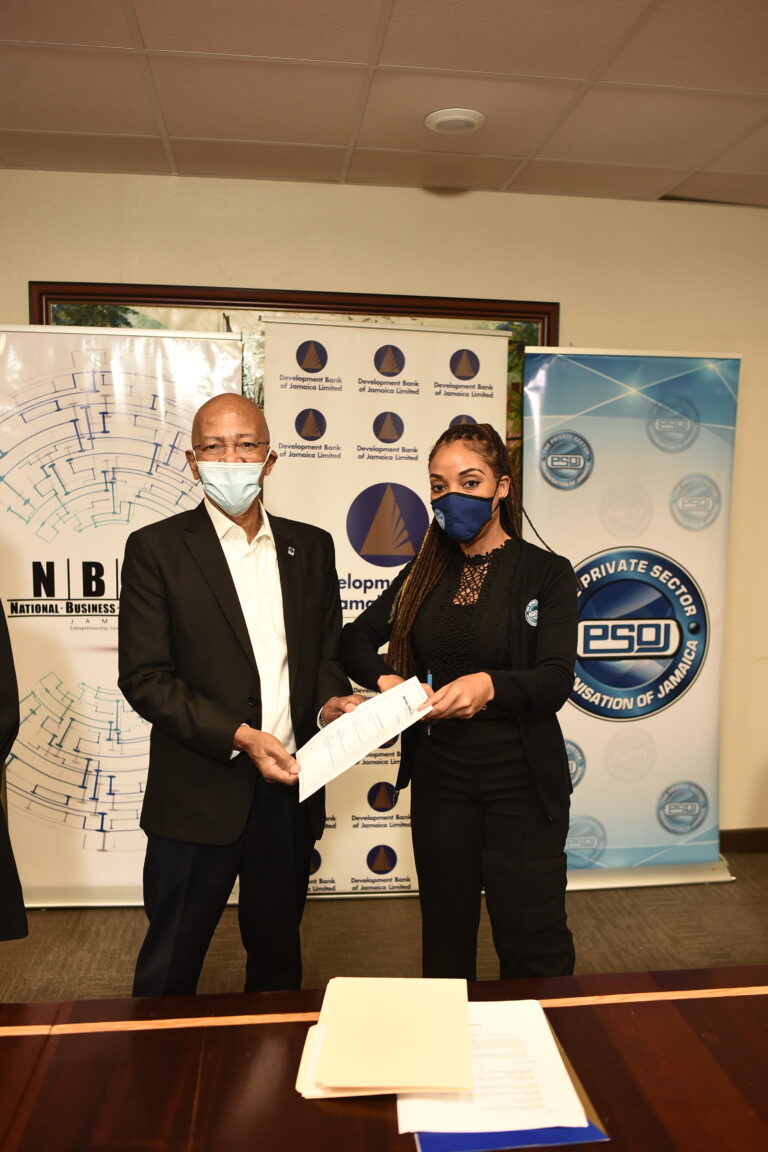 Milverton Reynolds, Managing Director of the Development Bank of Jamaica, and Imega Breese McNab, Executive Director of the Private Sector Organisation of Jamaica, pause for a photo op at the sponsors’ signing ceremony for the 2021-2022 National Business Model Competition launched yesterday. The competition will be held virtually this year (March 14, 2022). 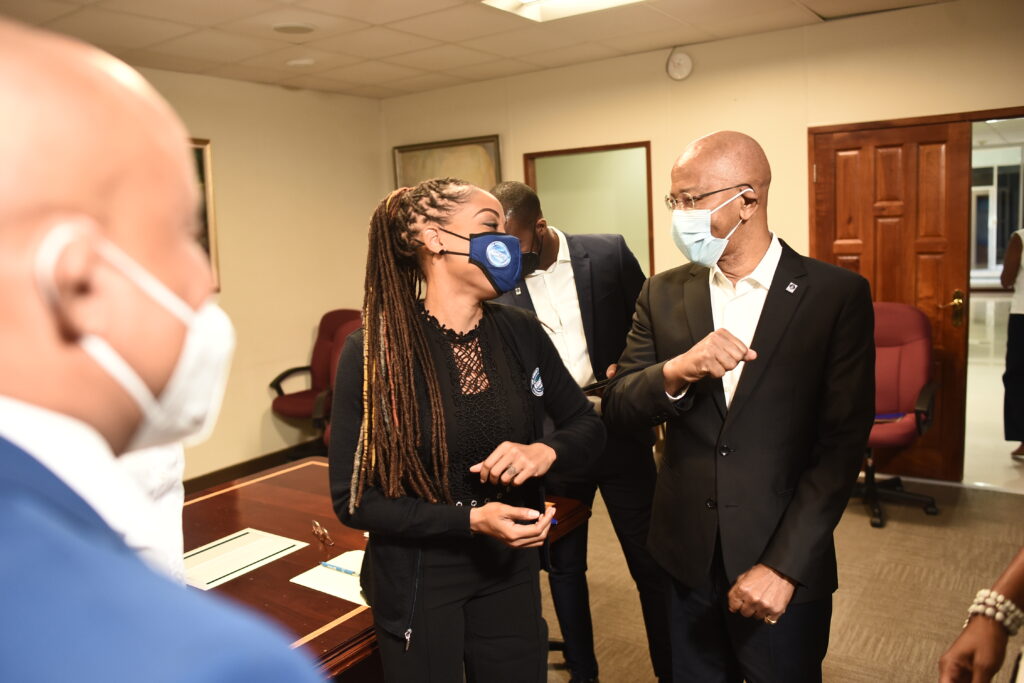 Milverton Reynolds, Managing Director of the Development Bank of Jamaica, greets Imega Breese McNab, Executive Director of the Private Sector Organisation of Jamaica, at the sponsors’ signing ceremony for the 2021-2022 National Business Model Competition launched yesterday. The competition will be held virtually this year (April 7 & 8, 2022). 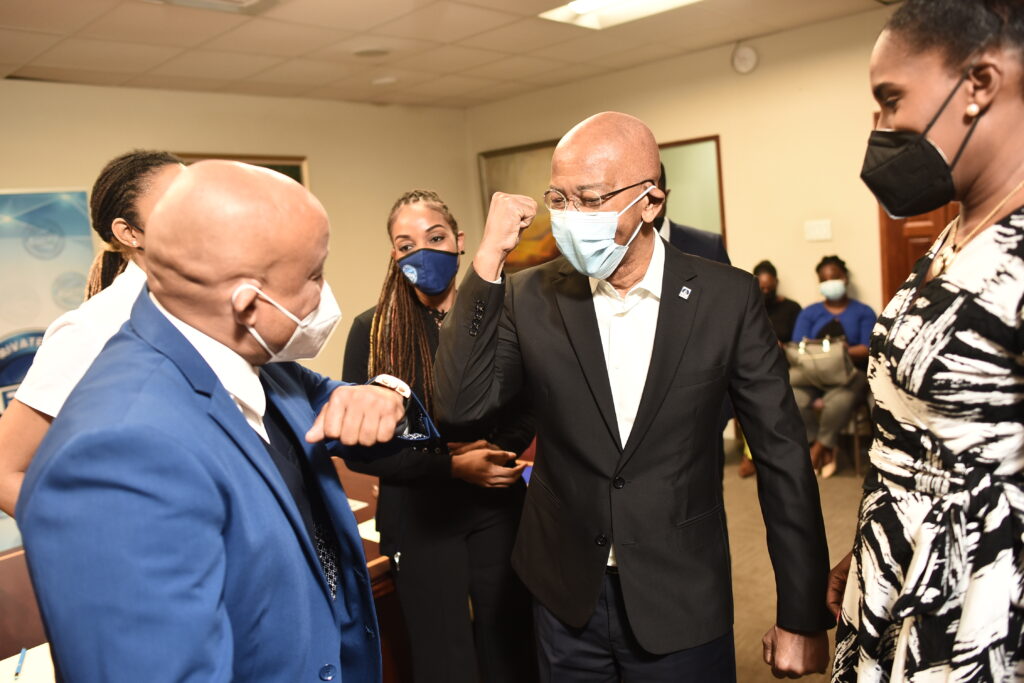 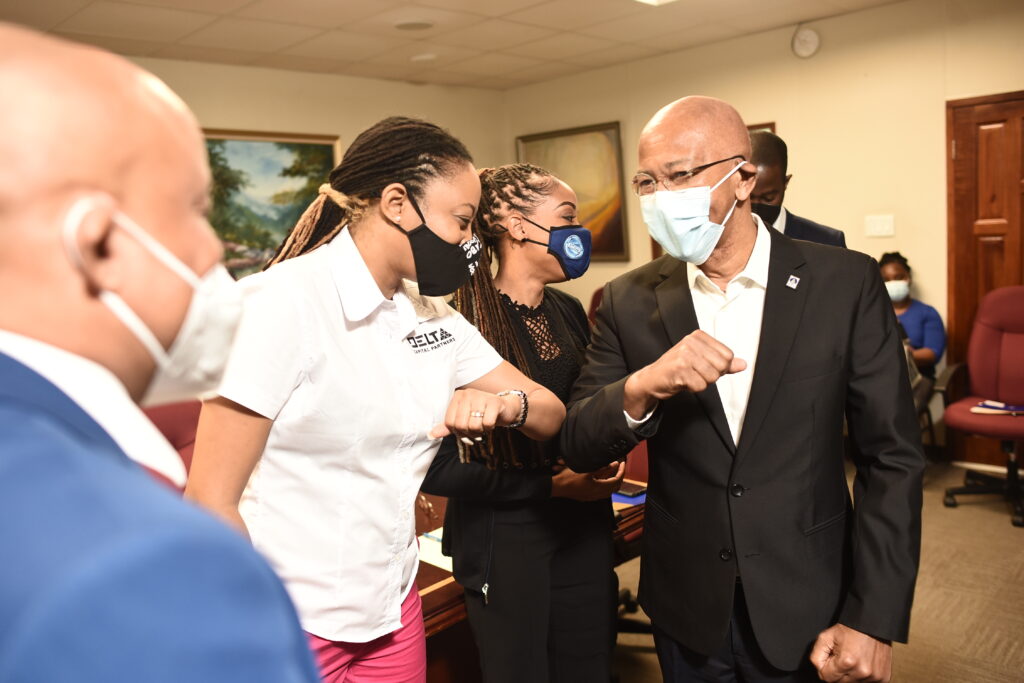