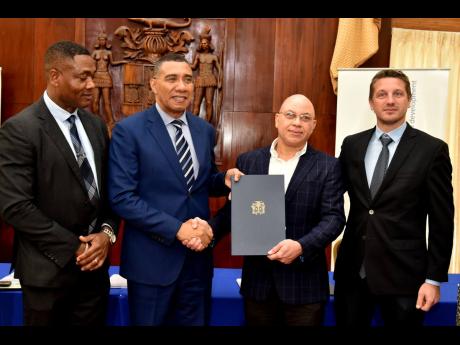 Prime Minister Andrew Holness is admonishing those who he says seek to malign the private sector, contending that cooperation between the Government and enterprises is integral to the country’s development.

“This argument that seeks to villainise the private sector should be dismissed, and anyone who tries to make it seem that the private sector is the enemy,” he said. “As a people, we can’t move forward unless we have a strong and innovative entrepreneurial private sector that will come and work with the Government to create the public goods that we all benefit from.”

Holness was speaking on Wednesday at a public-private partnership (PPP) contract signing between the National Water Commission (NWC) and Rio Cobre Water Limited for the construction of a US$77-million (J$11.9-billion) water treatment plant in Content, St Catherine. The project is expected to be completed in two years and will provide NWC customers in Kingston and St Andrew, Portmore, and Spanish Town with an additional 15 million imperial gallons of water daily.

Holness, who is also minister of economic growth and job creation, emphasised that PPPs like these are valuable to growth and, ultimately, improving the lives of citizens. He stated that without this kind of collaboration, the NWC may not have been able to finance such a project.

Under the agreement, the water treatment plant will be owned for 23 years by Rio Cobre Water Limited, a consortium which includes Vinci Construction Grand Projects, Jamaica Producers Group and Eppley Limited. After this period, the contract can be extended for another five years, after which, default ownership falls to the Government.

It is being financed through Sagicor Investments and Bank, whose president and CEO Christopher Zacca emphasised his commitment to ensuring its completion.

“This is a complex project, and these are complex times in the financial markets, and to deliver this project, it will take all of us stakeholders continuing to work together assiduously. Water is life, literally, but it is also the lifeblood of our nation’s growth and development, and make no mistake, we must get this done, and we will get this done,” he said.

Meanwhile, as he signalled his administration’s intention to extend these public-private partnerships to the provision of housing, educational services and infrastructure, and health, Holness said the Government’s interest is protected in what he describes as a robust PPP policy.

“We have managed through this policy to bring dead assets [to life] … . We had them on our balance sheet. They weren’t really of [any] value because we weren’t able to use them, we weren’t able to get them operational and we didn’t have the money to get those assets to life,” he said.

“PPPs, going forward, will be an important feature of the Government’s growth and development plans. I am using this platform as a means of promoting to our local private sector and international private sector as well. The Government wants to work with you for the benefit of the Jamaican people,” Holness added.